August 04, 2013
SITREP of Operation Deccan Dhakkan
and the answer to the age old question: "how many frogs does it take to enlighten India?*

The word ‘dhakkan’ in Hindi means ‘lid’, but the word is used as a slang to refer to a dumbstruck person. Operation Deccan Dhakkan did exactly that - put a lid on all activity in the Deccan Plateau and left everyone dumbstruck or Dhakkan!

On 18th July 2013, Agent Avenger and some other Resistance members of Pune, Nagpur, and Bangalore decided to give Hyderabad a gift - a seamless blue blanket over the entire city. Little did they know that Hyderabad - the city of Nizams - would return the gift in the near future, along with interest.

Pooja Srinivas aka Agent Seeker travelled to Ahmedabad on vacation on July 20th. She visited Nadiad and upgraded the Santram Temple portal (captured by Agent raz696 after it was taken down by Ahmedabad smurfs). Links were made to this portal from other cities.and added link amps. Later, in a conversation with Shivangi Vyasulu aka Agent Floydified, Agent Seeker mentioned that the Nadiad portal could reach the outskirts of Bangalore, triggering off the idea of a big green ‘dhakkan’ on the Deccan Plateau.

CITIES INVOLVED IN THE OPERATION

Nadiad
Nadiad in Gujarat is a city known for the number nine. There are nine exits to the city with little towns located on each of these exits.  Nine step wells around the city; and nine lakes in the city. The Santram Mandir in Nadiad is known for its amazingly selfless works of charity in the field of physiotherapy and ophthalmology. This is the portal of origin for Operation Deccan Dhakkan -- a reply to Deccan Sapphire.

Hyderabad
Hyderabad is the capital city of Andhra Pradesh. It is the information and biotechnology hub of India, and is famous for its pearls, biryani and haleem. The Hyderabad Enlightened’s plans of linking to Nadiad and were interrupted when the Resistance agents made a bow-tie shaped field across the middle of India. When the fields in Alibaug and Bhubaneshwar were taken down, Agent Seeker and the fellow Enlightened created a CF from Hyderabad to Nadiad forming a solid green passage for the Shapers. When the Resistance took down this CF, the idea of something bigger - Operation Deccan Dhakkan - was born.

Chennai
Having been the hub of CFs in recent times, as well as on the opposite coast from Goa, Chennai was critical in covering the Deccan Plateau in green and ensure optimal Shaper penetration and true ‘dhakkan’ effect. Using Chennai for this Op also meant that Bangalore, a city with high Resistance activity would be engulfed in green, preventing any interference from the local Resistance.

Bangalore
Bangalore is also known as the Silicon Valley of India. It is known for its entrepreneurial activity, greenery, wonderful all year round climate, great food, and most recently, for its pub and underground music scene. Owing to their many past trips and previously executed Ops, Bangalore agents already had keys to Chennai, Kochi and Goa portals. Adding a few additional fields was just a matter of a few links.

Kochi
When Bangalore Agent ebyed visited Kochi and linked to Goa’s Donna Paulo, little did he know that the link would become crucial to this Op. This valuable Goa-Kochi link was kept intact by agents recharging the portals remotely from Bangalore and Goa. Edappally Church has been a wonderful acquisition for Enlightened India.

Goa
Goa with its quaint Portuguese influence has lured tourists from all over the world seeking relaxation. Agent Seeker visited Goa on work and met local Agent digim0nk. They exchanged all the necessary keys and the stage was set for the operation. Fountain of Youth and Donna Paula were chosen to be the central portals. Agents Floydified, d00mslayer and Alzh from Bangalore already had those keys from the previously executed Op West Coast Customs. Agent killcreek from Chennai also had keys to those portals from Op GreenWire.

CITIES THAT WERE SAFEGUARDED FOR SHAPER PENETRATION

Nadiad – The Santram Temple was enveloped in a beautiful and calming green.
Vadodara – This city has had a lot of resistance activity and was at a standstill during this Op.
Pune – The city that was part of Deccan Sapphire, was covered in green for over 24 hours.
Kolhapur – A city that was used to create the Bow-tie CFs by the resistance in Central India, bathed in green.
Goa – A city with a lot of ancient relics and buildings that could hold some undiscovered Glyphs, was open for discovery.
Hyderabad – The Nizam city where a Glyph was recently discovered once again free for Shapers.
Bangalore – The Silicon City of India with the technology to aid Shapers on their mission.
Chennai – Having been a part of many Enlightened Ops, this city has the working knowledge of Shaper penetration patterns.
Mysore – A city with many tourist attractions that may house a lot of artifacts that could help Shapers on their mission.
Kochi – Fairly untouched by the Resistance, this city with its high literacy rates is ideal for Shaper understanding.
Coimbatore - The fourth largest metropolis in South India, painted in green.

Early in the morning, Agents in Hyderabad, Chennai, Bangalore and Goa prepared for Operation Deccan Dhakkan by clearing cross-links that may have hindered the Op.

Agent Floydified drove down to the WONDER LA portal 30km south of Bangalore to take down some defense links put up by the Resistance.

Agents Alzh and d00mslayer drove 14km south of Bangalore to upgrade and link Champakadama Temple to Miniature Statue of God Ganapathy in Chennai, Edappally Church in Kochi and Donna Paulo in Goa, creating a control field and starting the sequence of links.

Agent killcreek in Chennai, on cue, linked Miniature Statue of Ganapathy to Donna Paulo in Goa and Edappally Church in Kochi, engulfing Bangalore in green.

The fields in Bangalore were immediately taken down by a Resistance agent. There have been concerns regarding the authenticity of this agent, which were reported many times before, and will hopefully be taken care of.

Agent QuliQutbShah in Hyderabad drove 30km to the airport to clear more blocking links, and clear the way for the links form Hyderabad. Agent HashiramaSenju then linked Baba Temple in Hyderabad to Miniature Statue of God Ganapathy in Chennai and Santram temple in Nadiad.

Agents Seeker and digim0nk then linked Fountain of Youth in Goa to Santram Temple in Nadiad covering Hyderabd, Pune, and all the cities in between in green.

When the portals in Hyderabad were taken down by noon, Agents HashiramaSenju and QuliQutbShah recaptured the portals immediately and together with Agents Seeker and digim0nk, recreated the entire round of CFs again, assaulting Pune with bouts of fields in green. For blanketing Hyderabad in blue for a few hours, Pune faced over 24 hours covered in green, allowing for Shaper penetration to its maximum.

The control fields created in the afternoon yielded 88,483,736 MU total.

Operation Deccan Dhakkan was a success, and went above and beyond the original planned operation.

AGENTS WHO WERE PART OF OPERATION DECCAN DHAKKAN 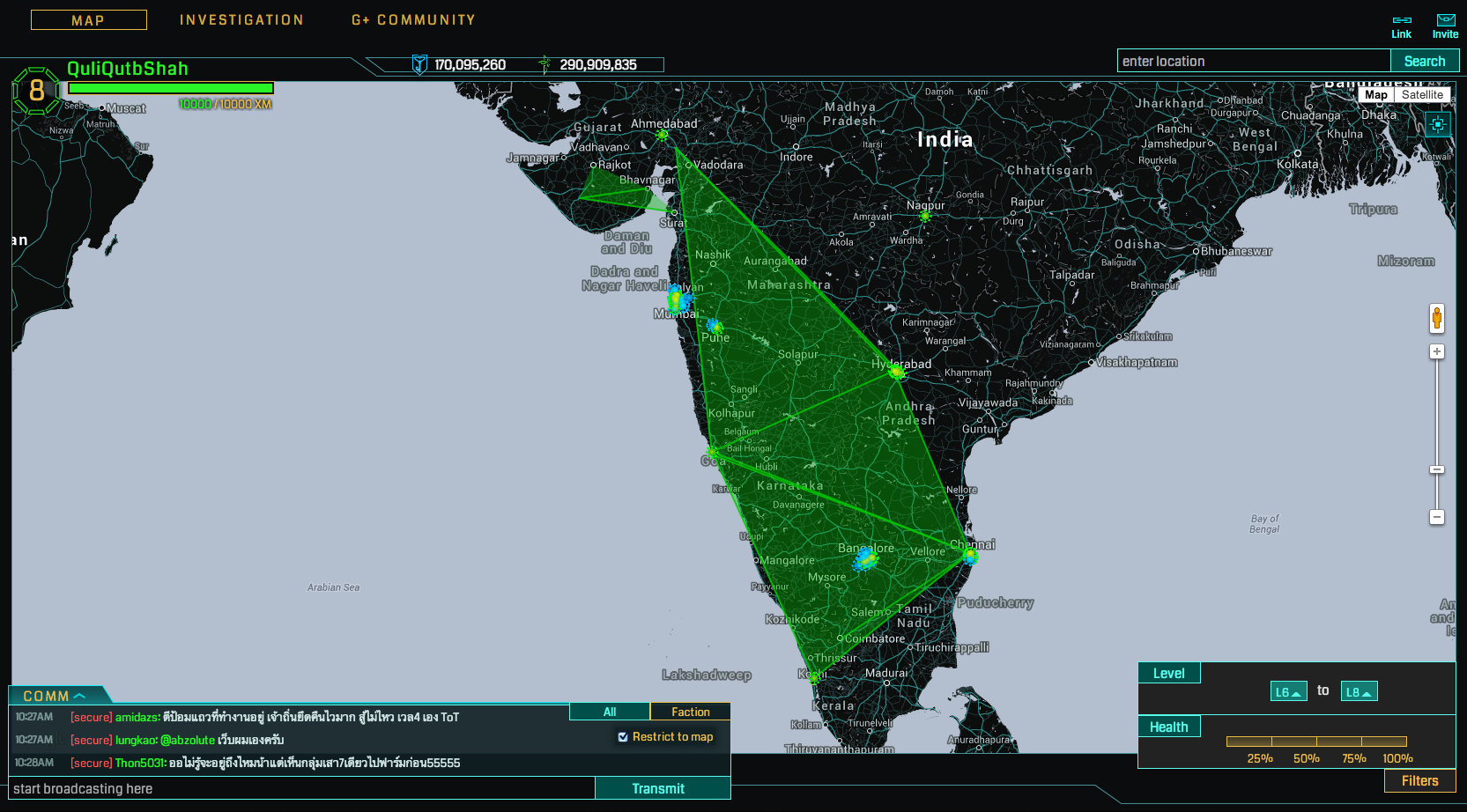 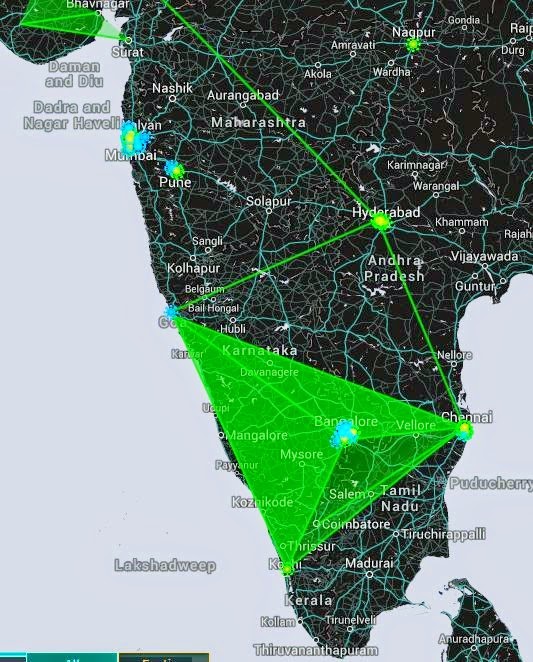 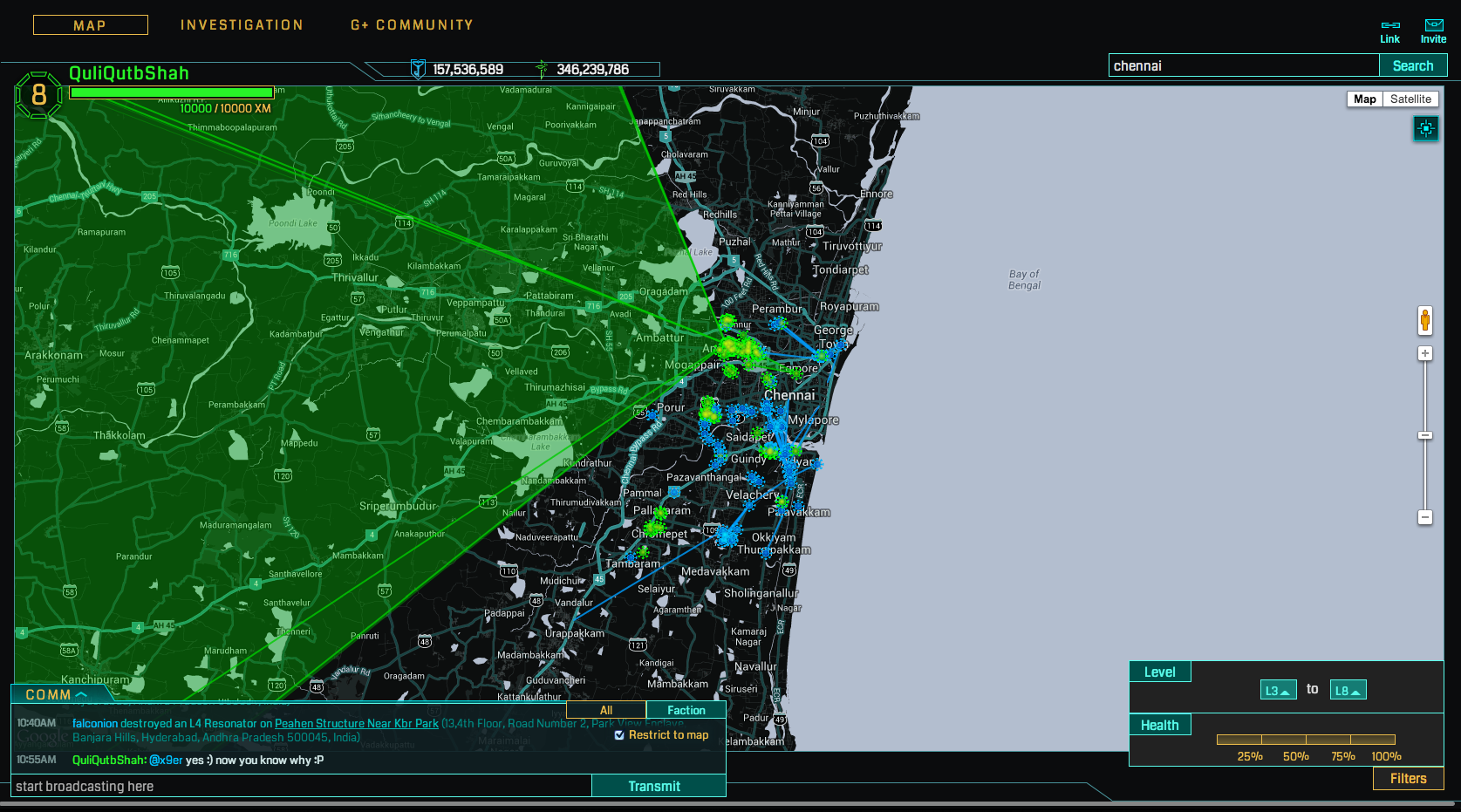 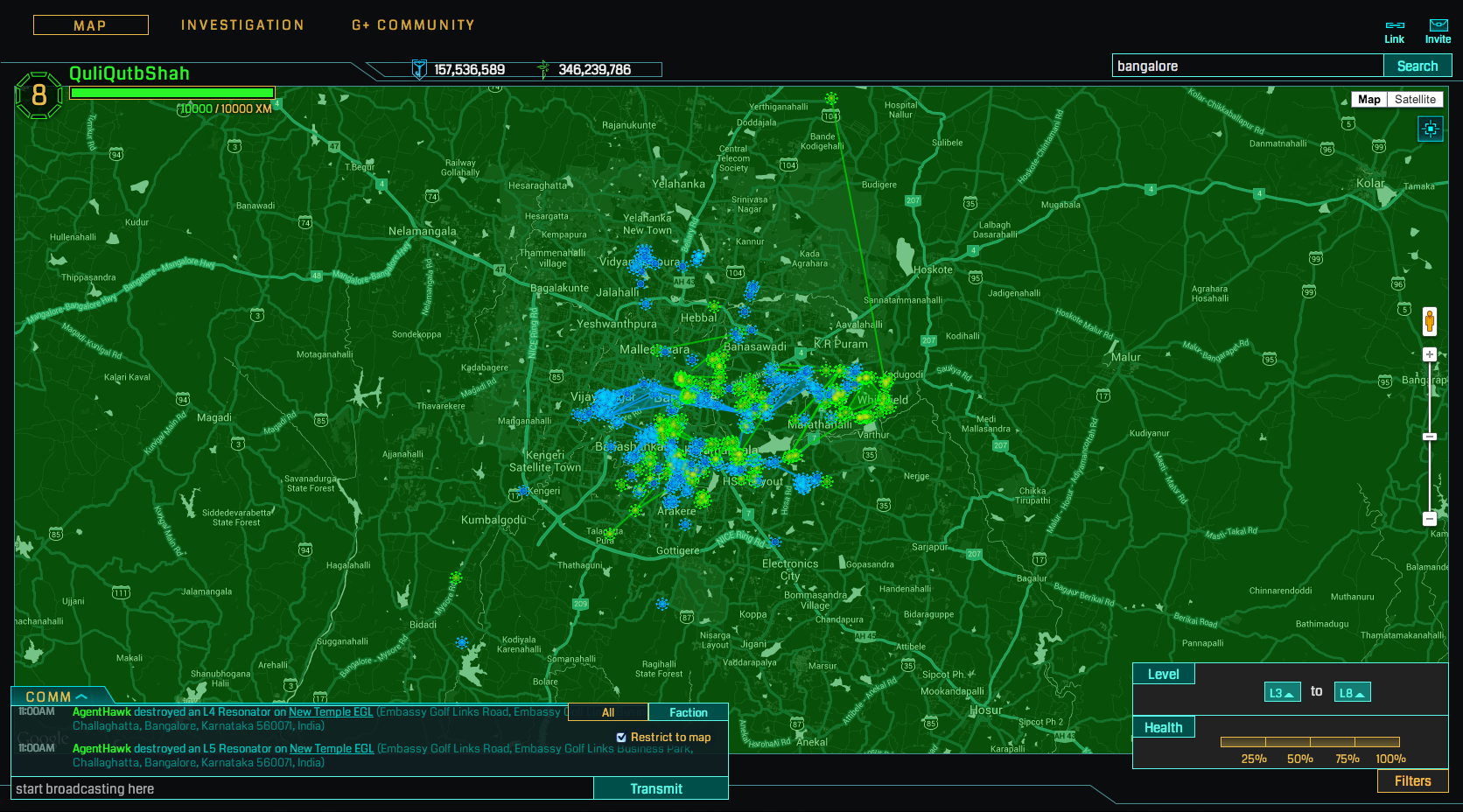 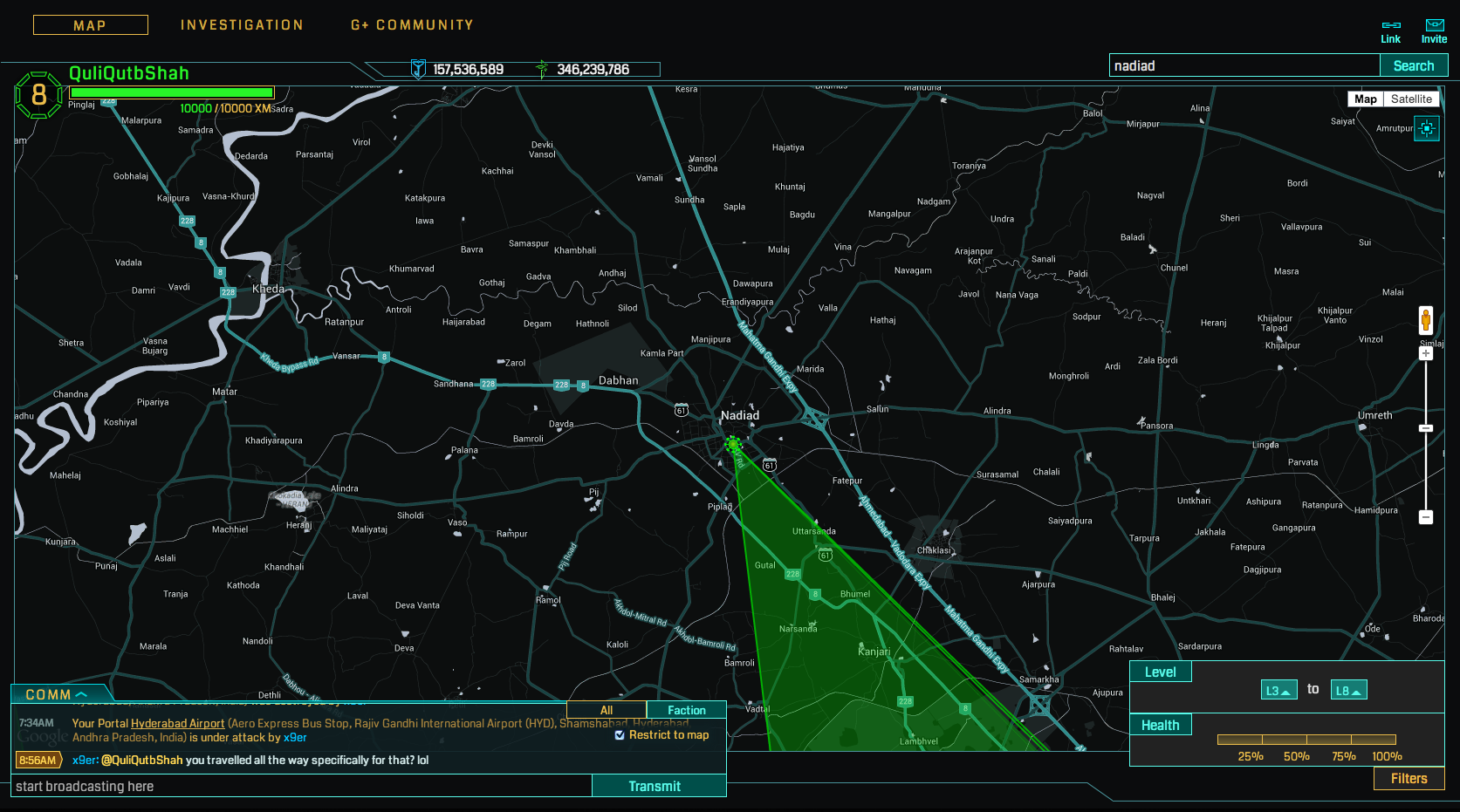 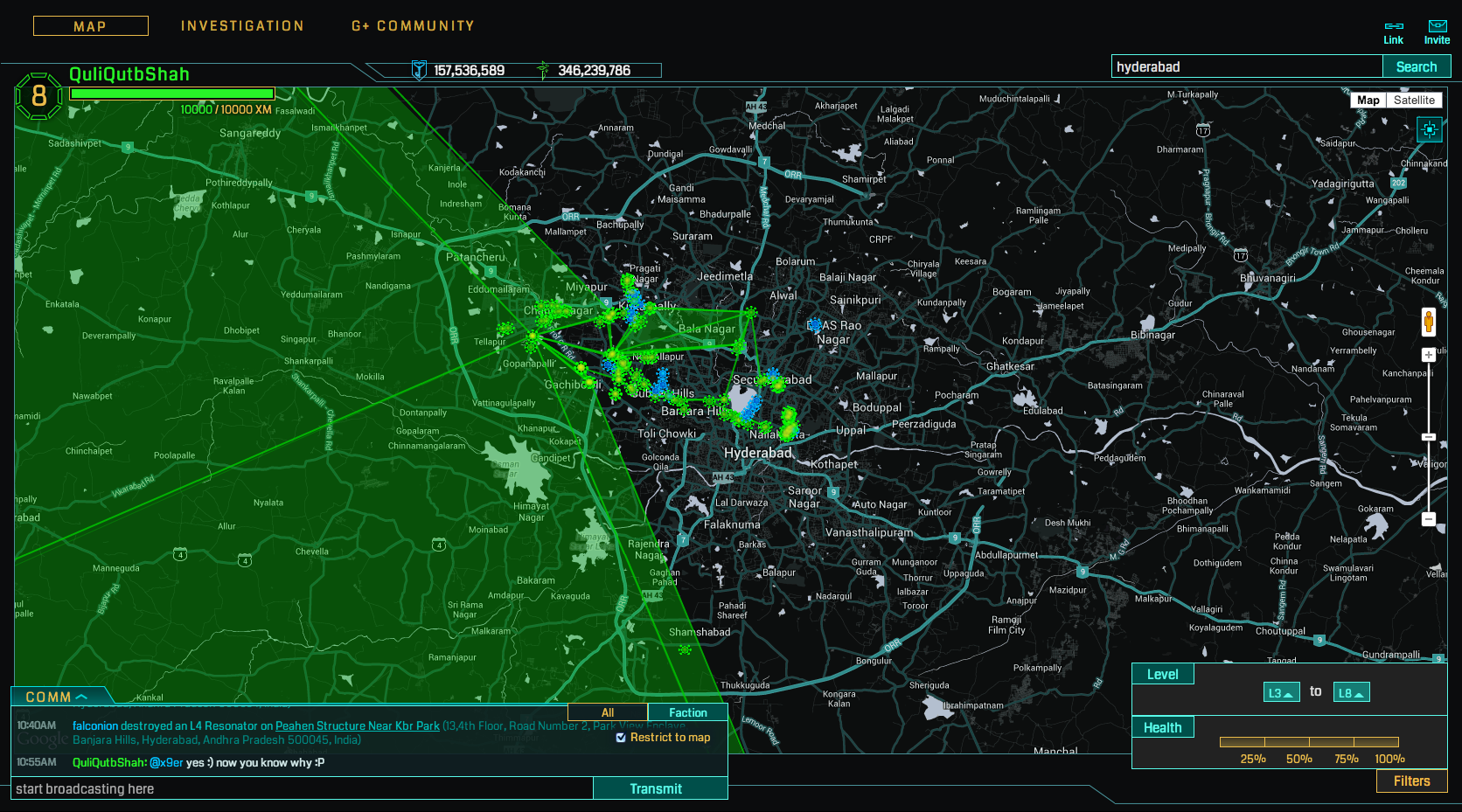 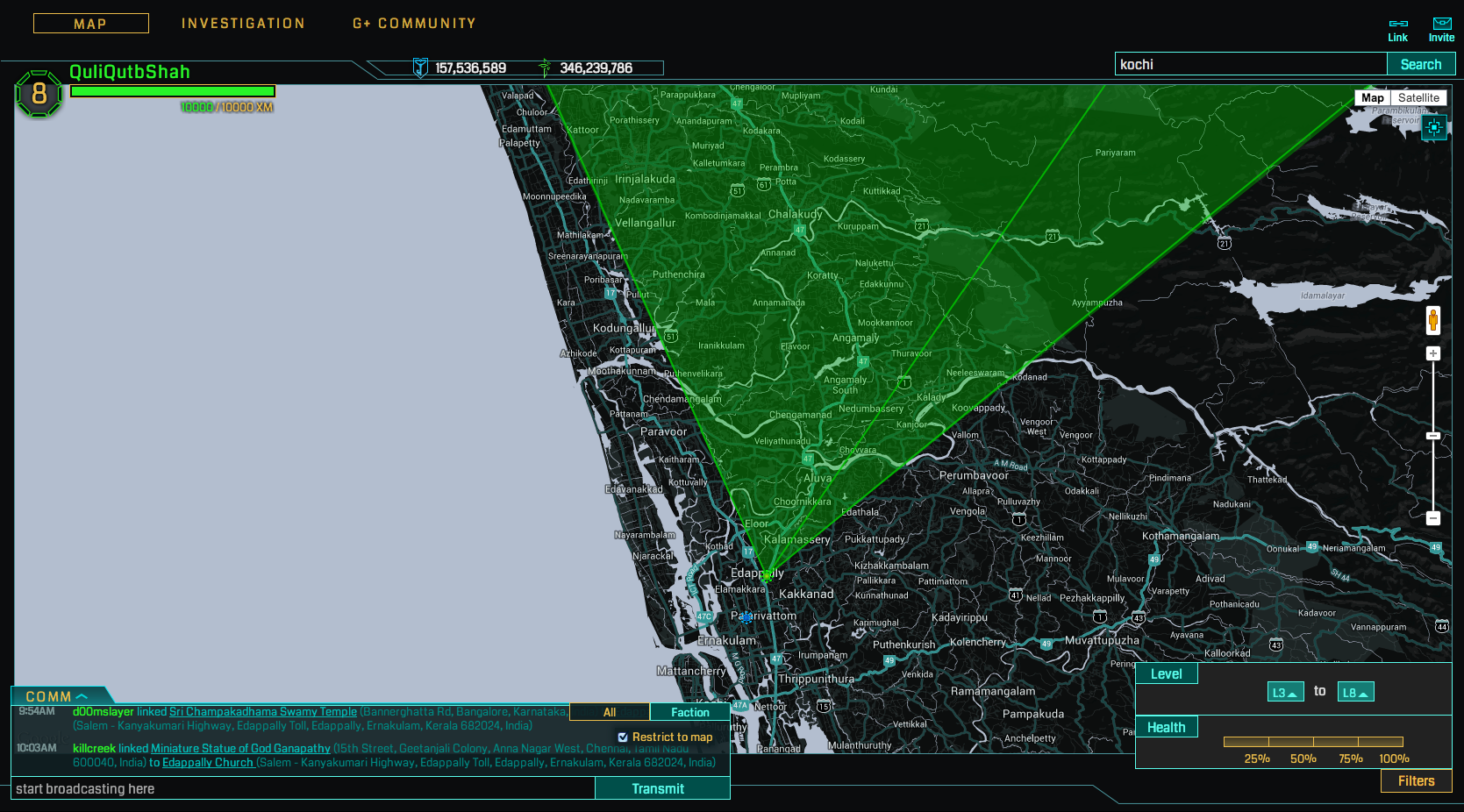 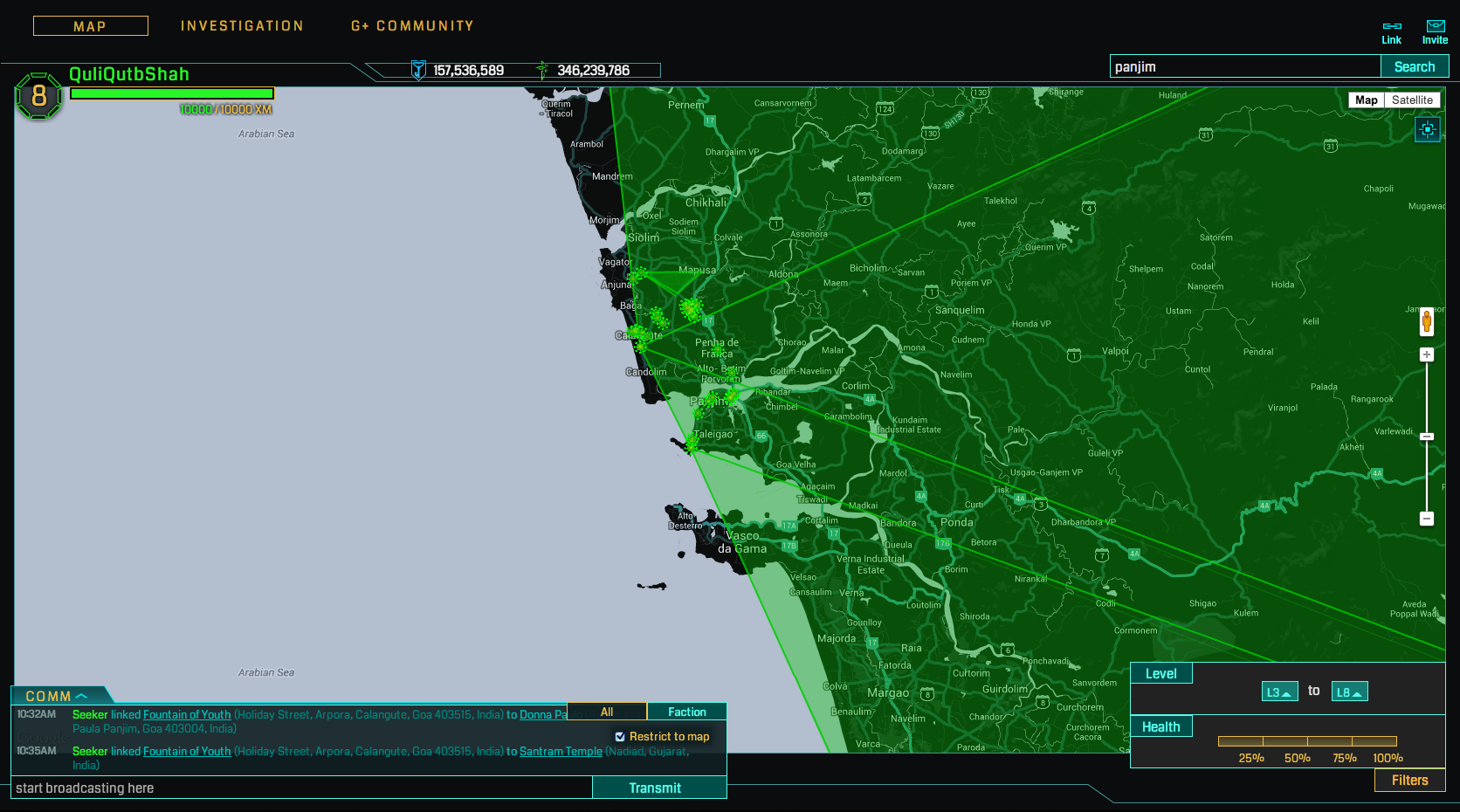 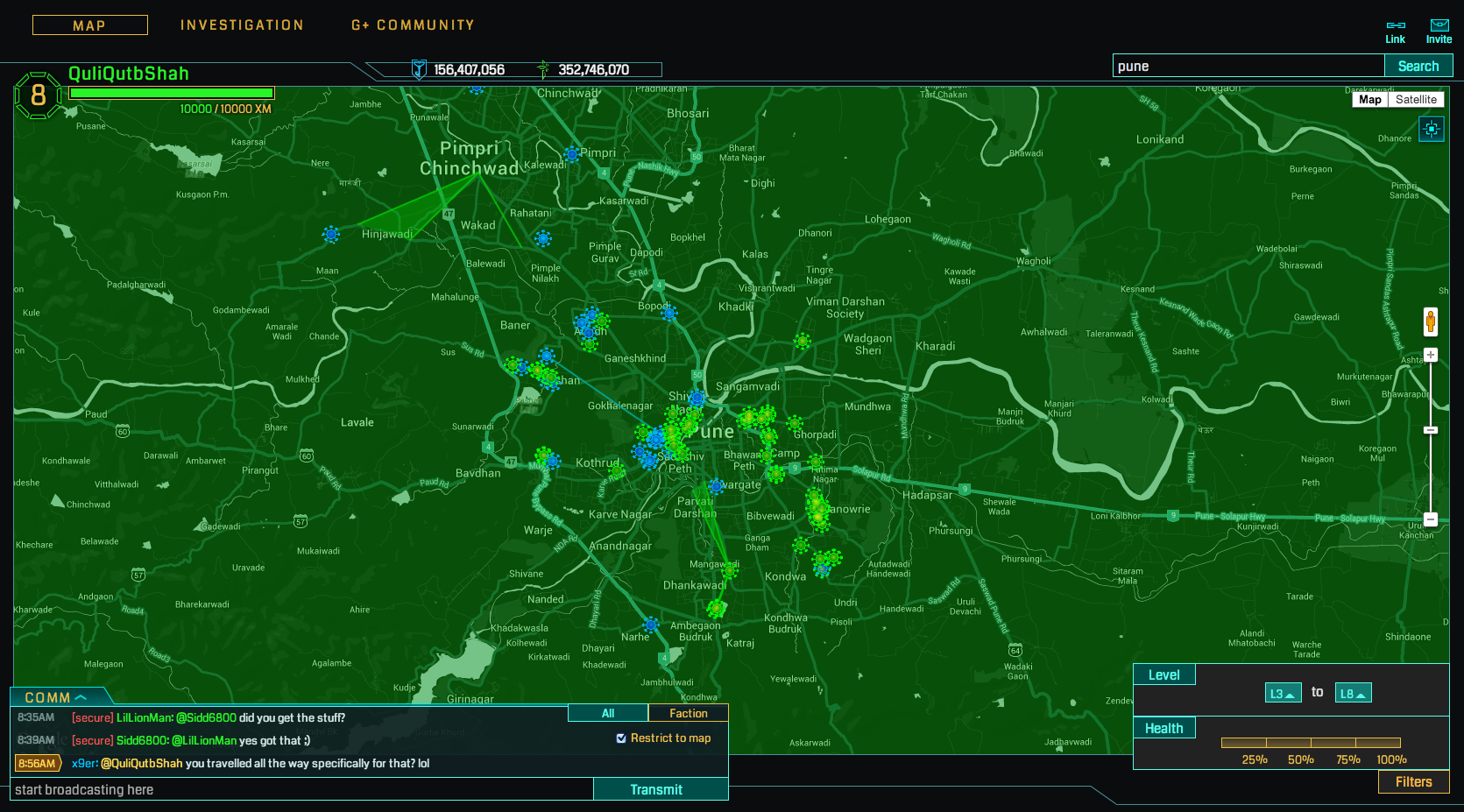 The answer to yesterday's "Who's That Pokémon?" is… Forretress! Did you guess the correct Pokémon?

Originally shared by Pokémon GO The answer to yesterday's "Who's That Pokémon?" is… Forretress! Did you guess the correct Pokémon?

Originally shared by Pokémon GO Who's that Pokémon?